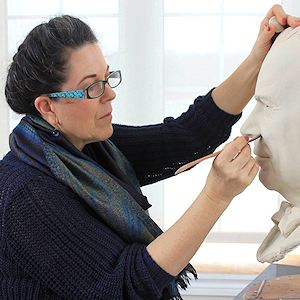 Ruth Abernethy was born in Lindsay, Ontario. She grew up on a small farm with an inventive and musical family.

Hired for professional theatre at age 17, she subsequently studied at Malaspina College (University) in Nanaimo, British Columbia. At age 21, Ruth was Head of Props at the Royal Manitoba Theatre Centre (MB) and joined the Stratford Festival (ON) where she received an unsolicited Guthrie Award in 1981. Ruth has worked with most of Canada's regional theatres, the Louisville (US) and National Ballets (CAN), executing and managing work for renowned international designers. She received Canada Council support for pursuing arts explorations in Japan and Europe in 1985.

Ruth designed an off-the-grid home, launched her solo art practice and was offered studio sessions with actor/artist Anthony Quinn following her first bronze commission in 1996. Her refined method of mapping and carving figures led to the commissioning of 'Glenn' (Gould) at CBC, Toronto in 1999, the first of numerous distinctive public portraits including Mackenzie King, John Hirsch and Arnold Palmer. A bronze portrait of Al Waxman was acquired for the National Portrait Collection, 2003 and her figure portrait of Oscar Peterson was unveiled by Queen Elizabeth II in 2010. 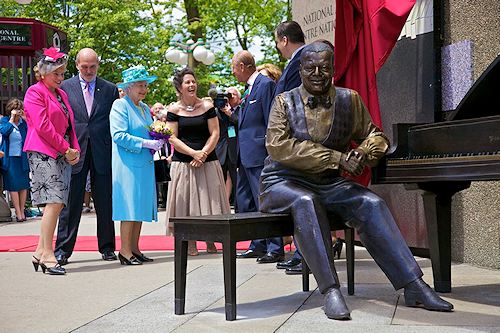 Ruth's sculptures have been juried into exhibitions in the United States. She was shortlisted for a large public bronze in Chandler, Arizona (2001). She was the first Canadian artist to exhibit with Sculpture in Context, Dublin, Ireland (2007), also with Sculpture-by-the-Sea in Sydney, Australia (2004). For this, she was awarded a bursary from the Canadian Consulate in Sydney. She was invited for a return to the Casuarina Sculpture Walk in Australia in 2006. The only Canadian short-listed artist in the Beijing Olympic Sculpture contest, Ruth was also awarded an Award of Excellence. Her submission was included in an international exhibit, touring Europe, US and London UK prior to the opening of the 2008 games. Her sculptures have been placed municipally, regionally and nationally and she's been awarded numerous private commissions. In addition to portraiture, Ruth's studio works combine textiles, hand-made lace and stainless steel. Pieces from The Canadiana Collection were selected for the Canadiana State Collection for exhibition in Ottawa's official residences, two works were exhibited in New York State with Crossing Borders, and five sculptures from the group were acquired by the Royal Ontario Museum in 2009.

Each studio work evolves from a conceptual conversation, within which, countering ideas are distilled to potent, well-structured forms. The process of creation is fundamentally abstracted, even if the resultant sculpture is perceived as a literal rendering. With great regard for the public audience, Ruth encompasses studied regard for playful thought and timeless paradoxes, seeking to create moments of personal encounter that linger in the imagination.

Ruth divides her time between studios in Wellesley ON and Vancouver BC.